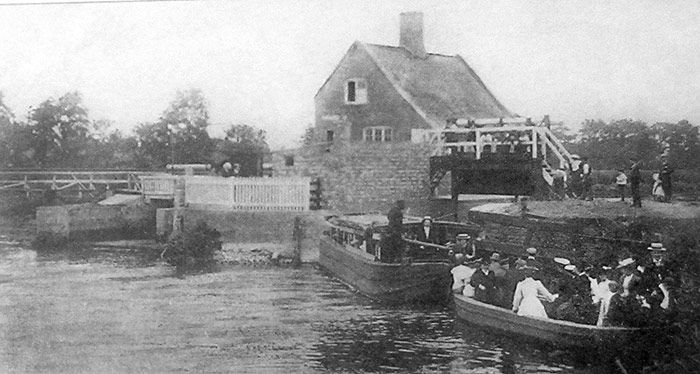 We are a club run by the members for the members. We rely on our members to help us in organising events, running the bar, preparing food, work parties to maintain our club and a slipway team.

We have a busy social calendar, including our annual Regatta, Charity Day, Commodore's Night, Firework cruise, Christmas and New Year festivities and various other social events throughout the year.
You can view all the dates on the Diary page.

We are proud of our facilities including, our Clubhouse with a  bar, shower room, toilets, diesel sales, workshops, moorings and slipway facilities.

The aim of the Club is to encourage all types of boating amongst members and anyone may apply to join the Club. If you are interested in joining, please see the Membership section.

The club was formed on 29th November 1932 as the Nene Boating Club; a piece of the river bank adjoining the osier beds at Orton Staunch was rented, which has been the home of the club ever since. A former tennis club pavilion was purchased and re built on site. This building with various additions and alterations served the club till 1974 when the present clubhouse was built, it was used for storage until it was demolished in 1989 when the present annex was built.
The history of the whole site is like that of the clubhouse, additions and improvements being undertaken as they were required, or as opportunities arose.


The former Orton Staunch showing traditional river Nene boats, several of these are still below Orton lock where they were sunk to prevent bank erosion.

In 1943 the original land was purchased, access was still by bicycle, or on foot, from the footpath across the fields from Longthorpe to Orton Longueville and then through Mr Vyse’s property from Orton Lock. Beer and other heavy things were either brought across the fields from Orton Waterville, or ferried across the river from Horrell’s fields opposite the club house; either option involved finding the farmer and borrowing a key to open the field gates.

A great step forward occurred in 1956 when the club purchased the present roadway, hard standing and the riverbank upstream from the mower shed to the point.

At this stage a lot of effort went into making up the road, and later, constructing a ‘patent’ slipway at the point. The latter was never satisfactory as the slipway faced upstream and the railway track was always being buried in mud.

At the time it was thought that we had enough land, but it was necessary later on to buy some more to extend the hard standing; at the same time the bank of the Carp Hole was acquired.

One of the reasons for extending the hard standing was the construction of the present slipway in 1967. The old slipway at the point was eventually reclaimed with the assistance of the Nene Catchment Board; fortunately for the club, John Cobbing and Harold Clarke, the Board Engineer, were neighbours and great pals!

The arrival of the Development Corporation heralded great changes to Peterborough including the creation of Nene Park; this had both good and bad outcomes for the club.

In the early post-war years break-ins on boats were usually due to absconders from St John’s School at Apethorpe seeking shelter. With the opening up of Nene Park the club ceased to be secluded and vandalism, etc., became a great problem. Despite having quite a substantial hedge round the club site break-ins became frequent, the favoured point of entry the Carp Hole area. Second-hand palisade fencing was acquired and erected to block off the Carp Hole and reinforce the hedge. Despite protecting only a limited area the effect was dramatic. The following winter new fencing was bought and the palisade fencing extended to protect the whole site, more recently electronic entrance gates and a state of the art CCTV systems have been installed

What about the boats? The original members had punts, rowing boats and small sailing boats. Some of these boats had motors as well!

After 1945 there were all sorts of  ‘war surplus’ craft available, quite a lot of lifeboats joined the club and had engines and cabins added – we even had one air-sea rescue launch!

1948 was the year that the club changed its name. Perhaps with the competitive sailing and London Olympics, it was felt that ‘Peterborough Yacht Club’ was a more appropriate handle, it might also have been because there was already an ‘N.B.C.’ on the river, which had earlier origins. 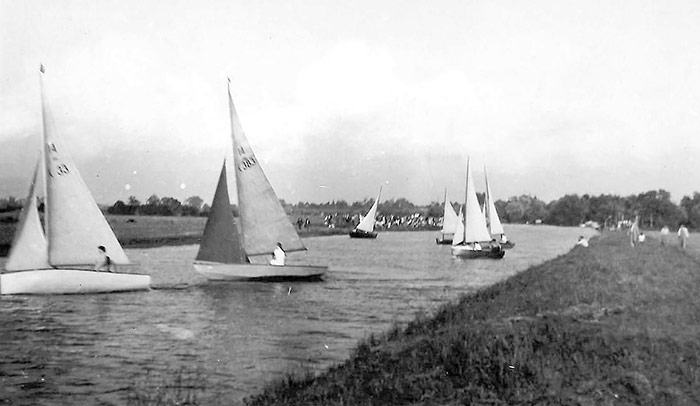 Sailing on the Nene upstream of Orton Lock 1947

These boats are “International 14 footers”. The first boat, on the left belonged to George Fovargue, a few years later Vernon Wenlock had the sail and mast off him for his own boat, a catamaran.

The 2nd boat, from the left belonged to Arthur Spinks. The photo is taken from the west of the Yacht Club. There are now narrow boats on the right and the golf course in on the left. On the right hand side of the photo there is a white hut, in the distance, that is where the Yacht Club slipway is now.
After the 1948 Olympics the dinghies were sold off and two of the Firefly fleet joined the club. These two-man boats joined a number of National Twelves and an era of competitive dinghy sailing started that lasted into the 1970’s.

For various reasons as dinghy sailing declined the club became the home of a growing number of, mainly, river cruisers though there were a number of boats that made the journey down to the sea and cruised the Wash ports.

How has the social life of the club changed? In the early days a supply of drinks was kept in a cupboard in the clubhouse and payment was by an honesty box system. With one of the extensions to the original clubhouse, a bar and toilets were constructed together with a cellar under the rear bar store. Flower’s Keg Bitter was the club tipple of choice. The bar front supporting the counter was half a clinker dinghy cleaned up and varnished; it looked very good in its new role. (see page back-ground)

Besides drinking, meals were prepared and served in the not overlarge clubhouse, and when not full of boats, the adjoining boat-store was used as a dining hall. However, during the club’s dinghy sailing heydays, the ‘set piece’ social event of the year was the Annual Dinner Dance. A black tie event to which the commodores of all the neighbouring yacht clubs were invited, speeches were made and the trophies were presented for the various competitions run in the previous season.

Dinghy sailing and annual dinner dances are of the past, what of today? We still have the three traditional meals in the clubhouse ­–  Fitting-out, Laying-up and Christmas – and in addition informal social evenings. 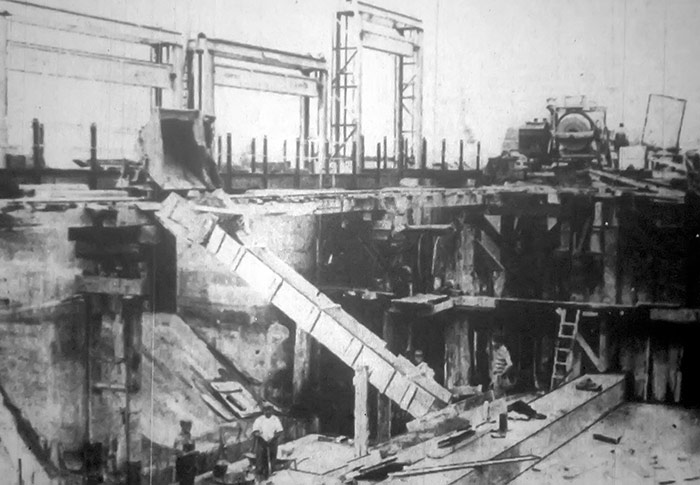 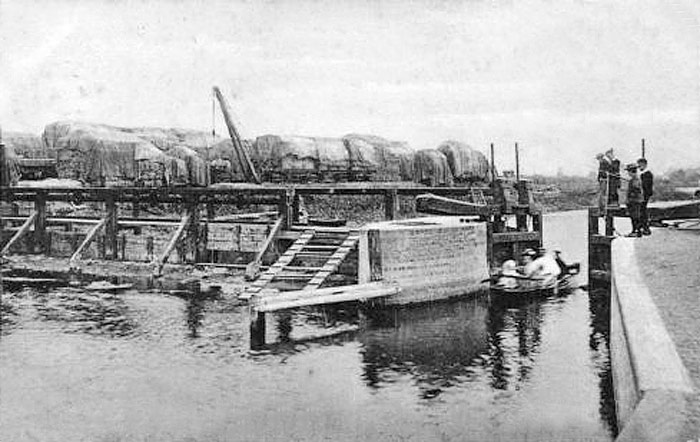 Woodstone Staunch was located downstream of Orton staunch, the wall where the boys are standing is still there. 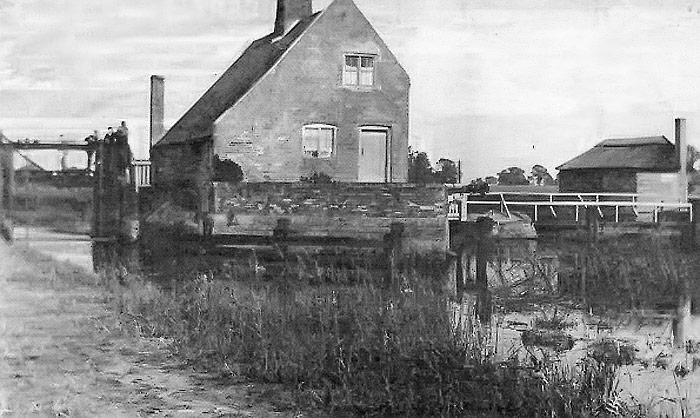 Orton Staunch viewed from upstream, the present Orton lock was built on the same site.
Information and images supplied by members.
Powered by